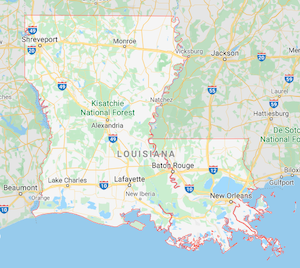 Louisiana Gov. John Bel Edwards is working on expanding broadband to 400,000 residents in rural parts of the state. However, in late July, plans to bring service to East Carroll Parish (in northeast Louisiana), including 66,000 homes and businesses, were halted, according to The Advocate.

Gov. Edwards had allocated a $4 million grant to Conexon, a Kansas City-based company that installs fiber optic networks, for the much-needed project in East Carroll. However, Sparklight, which already provides cable and internet services in that area, challenged the grant. Sparklight claimed to provide 960/50 Mbps service for 2,856 homes in the parts of East Carroll covered by the project, reported The Advocate.

In 2021, the state Legislature established the Grant Unserved Municipalities Broadband Opportunities (GUMBO) program to fund expansion by ISPs of high-speed internet into rural areas, appropriating $90 million. The majority of the funding comes from the federal American Rescue Plan and the federal $1 trillion Infrastructure Law, reported The Advocate.

According to Rep. Daryl Deshotel, a sponsor of GUMBO, the halt in East Carroll “will either end with the acknowledgment that the site in question already has adequate service or that the site will soon get service under the GUMBO grant. It will take some time to comb through the process,” he added. Deshotel discussed challenges leading to delays, including existing providers claiming to already service rural homes with fast enough internet speeds to meet upload and download criteria, which is “spot on” in the East Carroll Parish case.

The challenge to the East Carroll expansion is allowed under GUMBO regulations, said Veneeth Iyengar, executive director of the Office of Broadband Development & Connectivity. GUMBO regulations allow a seven-day window to protest after an award is announced. Protestors have 10 days to provide data supporting their challenge; bid winners then have 10 days to respond; the Division of Administration has 20 days to decide, and protestors can appeal.

Despite 67 grants awarded to the state for expansion, “I’m not seeing any work being done,” State Sen. Beth Mizell, a rural resident lacking internet access, told The Advocate. “I’m tired of hearing how much money is being put into broadband…None of that has become a reality. We’re still moving papers back and forth,” she added.

Louisiana’s goal is to provide universal access by 2029, with minimum broadband speeds of 25 Mbps/3 Mbps, scaling to symmetrical 100 Mbps.